Notify me when this product is in stock
Details
In the 1920s, a student in Pisa, Mario Incisa della Rocchetta dreamed of creating a race wine. His ideal, as for the aristocracy of the time, was Bordeaux.
This is how he describes it in a letter to Veronelli dated 11/6/1974.
"... the origin of the experiment dates back to the years between 1921 and 1925, when, a student in Pisa and often a guest of the Salviati Dukes in Migliarino, I had drunk a wine produced by their own vineyard on the mountain of Vecchiano which had the same unmistakable "Bouquet" of an old Bordeaux I just tasted rather than drunk, (because at 14 I was not allowed to drink wine) before 1915, at my grandfather Chigi's house. "
Having established himself with his wife Clarice in the Tenuta San Guido on the Tyrrhenian coast, he experimented with some French vines (whose cuttings had recovered from the estate of the Salviati Dukes in Migliarino, and not from France) and concluded that the Cabernet had "the bouquet I was looking for".
No one had ever thought of making a "Bordeaux" wine in Maremma, an area unknown from a wine point of view.
The decision to plant this variety in the Tenuta San Guido was partly due to the similarity he had noticed between this area of Tuscany and Graves, in Bordeaux. Graves means gravel, due to the rocky terrain that distinguishes the area, just as Sassicaia, in Tuscany, calls an area with the same characteristics.
From 1948 to 1967, Sassicaia remained a strictly private domain, and was drunk only on the estate.
You could try 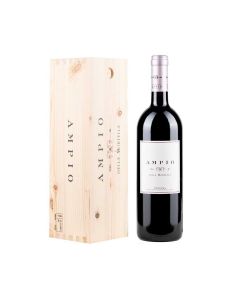